IAS produces access ladders for a wide variety of customers across the country. IAS products are safe, durable and convenient for applications ranging from contractor work safety to boat boarding at the lake. This versatility has earned raves from safety minded contractors and mobility challenged individuals alike.

Here are two examples of testimonials for work safety and optimal accessibility.

Trucker® ladders are designed for simple and safe access to any truck trailer.  This safety manager at a Fortune 500 construction contractor and long time IAS customer has great things to say about Trucker® trailer access ladders.

I have utilized your products on jobs I have worked on for the past 4 years, once we started using your Trucker and Drop Deck ladders we realized the great benefits and quality the IAS products provided.  Since using your products our yard bosses and operators have asked for them by name.

Any time I show up on a new job, your ladders are one of my first purchases.  Our truck loading and unloading procedures now call for your ladders specifically, they are in such high demand they have to be assigned to crews and locked in the storage box at the end of each shift.  I couldn’t ask for a better product as far as safety, quality and ease of use.

Thanks for a great product,

The Tooner I Ladder is designed for safe and convenient access to pontoon boats.  This customer was especially grateful for the accessibility and safety of the stairway ladder design with a rope available to assist with ascending up and out of the water.

I hope that you had a wonderful and safe holiday weekend. Just so you know, we are very impressed with the ladder and it’s quality. I had a skydiving accident 5 years ago, and injured my spinal cord. I have limited mobility, and this ladder now allows me to go into the water and enjoy the lake with everyone else. Seems like a small thing, but it’s HUGE to me.
Again, Thank you
Craig from Florida

About the AGC Safety Day Conference

To register for the AGC Safety Day Conference, visit the AGC of Kentucky website.

More About the Work Platform

The IAS work platform is an innovative approach to fall protection for flatbed trailers. The platform is composed of lightweight aluminum and easily mountable via CNC billet mounting hooks. Platforms are durable (ANSI rated to 3 man / 3,000 lbs) and equipped with a safety rail that is removable for convenient stow away and mobility. The IAS work platform is standard at 4′ and 8′ and customizable to meet specs. 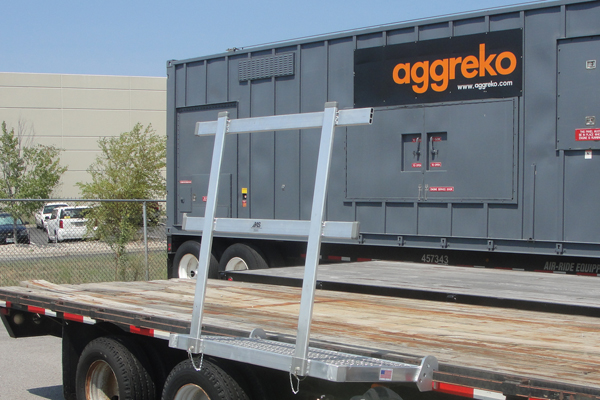 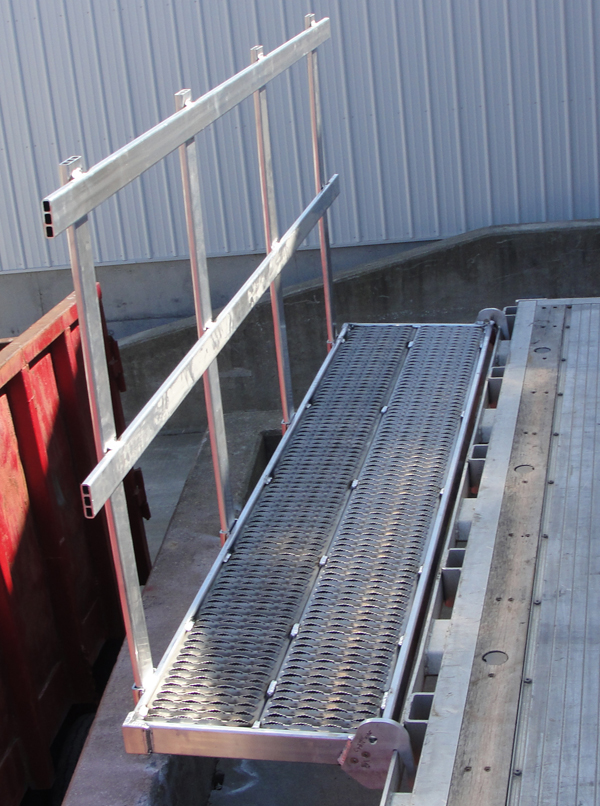 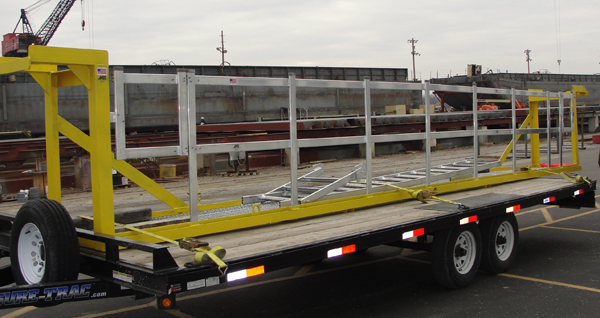 Attenuator trucks are highway safety vehicles equipped with an impact attenuating crash cushion for the purpose of reducing the risks resulting from crashes in construction work zones.  These specialized vehicles are often required for government highway contracts to improve safety and reduce work zone fatalities.

The truck mounted attenuator, or TMA, is a crash cushion that is specifically designed to attach to a vehicle such as a snow plow, road construction vehicle or maintenance truck, in order to absorb kinetic energy if struck by a motorist.  Not only do attenuator trucks save lives by absorbing the impact of a crash, they also reduce debris hazards after impact to improve traffic flow and reduce the risk to passing motorists. 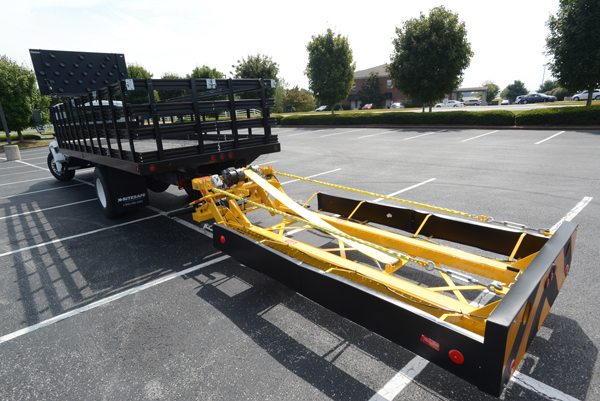 TMAs are tested by the federal highway association for effectiveness and speed ratings.  When mounted to road construction vehicles, TMA attenuators are subject to weight requirements and must be positioned at adequate distance to ensure the safety of workers and equipment in the event of a crash.

Road construction attenuator trucks typically have a bed for transporting equipment and an arrowboard or message board to instruct drivers of traffic conditions.   Many other equipment options may be necessitated by the environment and conditions including strobe lighting for driver awareness, work lights for night visibility, and equipment racks.

Review a summary of attenuator truck options and equipment.

Safety & Numbers blog sponsor Innovative Access Solutions, LLC produces portable flatbed truck access platforms for fall protection safety. The IAS platform is a new and innovative approach compared to other available flatbed fall protection options. With this in mind we are happy to help promote and review the advantages of a lightweight, portable platform as compared to bulky traditional wheeled systems. 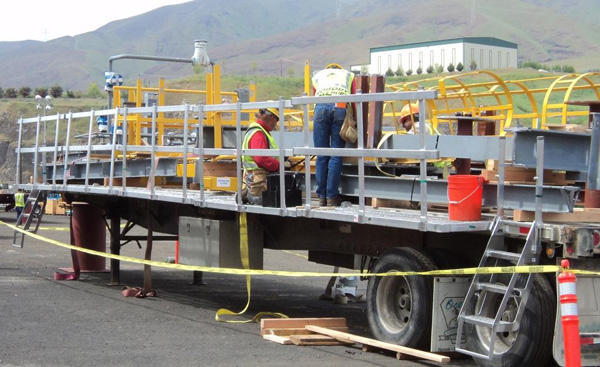 The majority of available flatbed access platform systems are wheeled or rolling platforms. These systems are ideal in certain applications. Truck fleets with high shipping volume, available space at their facility, and a sizable work force will appreciate the traditional wheeled flatbed access platform system. These systems typically provide space for a truck trailer to pull in between two parallel platforms which sandwich together on each side of the trailer deck. Traditional systems are generally expensive and less flexible.

When deciding on the best fall protection flatbed access platform for your company’s needs, we recommend considering available capital/workforce, the importance of mobility, and whether a bulky wheeled system will suit your needs.  The IAS flatbed access platform is mobile and portable, preventing the need to have a system consuming space at each site.  Being lightweight and modular, it is also easier to mount at any location and with fewer available workers. And the IAS flatbed access platform is ideal for specialized applications such as stationary flatbed trailers, contractor truck fleets, and industries including construction, mining and energy. 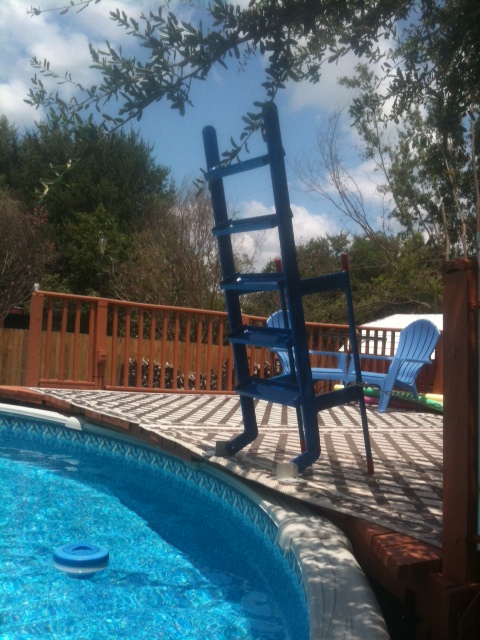 We have highlighted several products that help to prevent injuries in marine, transportation, manufacturing, construction, and other industrial settings. While we are all relishing in the summer sun and fun, we would like to present for your enjoyment a selection of safe recreational and residential marine access products.  IAS® produces Tooner boat ladders and dock access products for people and pets, and has designed access products and seating for residential pools, steam rooms, docks, decks and more.

IAS® is the producer of Tooner pontoon boat ladders, Docker dock ladders, and the Dog Step dock ladder. Each of these marine access products are designed with safety features including slip resistant tread, handrails for 3 points of contact, ergonomical staircase steps and a durable build. 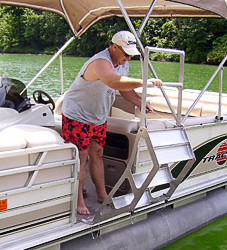 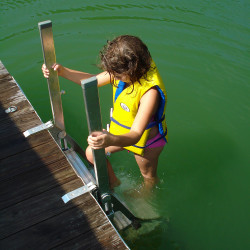 IAS® provides all weather aluminum benches that are ideal for docks, gardens, public areas, and more. Lightweight aluminum benches prevent splinters, can be mounted to any surface and powder coated to match a color scheme.  Benches come standard at 4′ or 6′ and are available up to 12′ with available handrails, colors and other options. 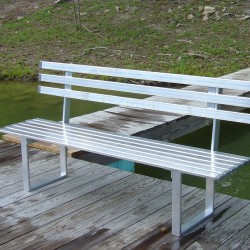 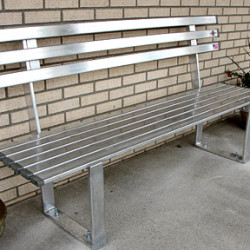 Additional details about benches available at the IAS® online store. 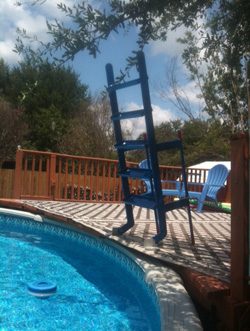 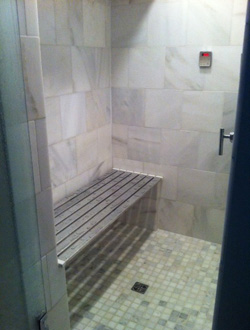 Have a safe and fun summer at the lake, pool, ocean, or watering hole nearest you! 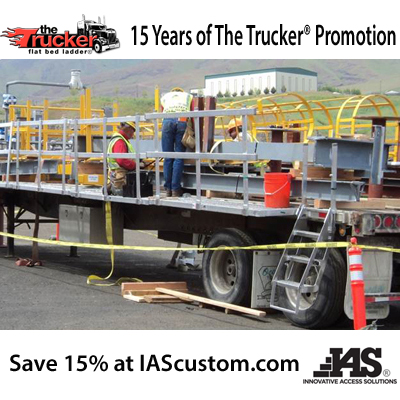